In May 1960, the Mossad captured Adolf Eichmann in Buenos Aires, and brought him to stand trial in Jerusalem. It's one of Israel's most glorified chapters, right up there with Entebbe, the bombing of the Iraqi Nuclear Reactor and Operation Solomon. So why did the doctor who sedated the Nazi mastermind minimize his role in the saga? And what can that tell us about the legacy of World War II, eighty years after its start?

Last month, the world marked the eightieth anniversary of Hitler’s invasion of Poland and the start of WWII. In Israel, too, this was a big milestone: Kids discussed it at school, academics held conferences at the various universities, newspapers ran articles and editorials. But this wasn’t, of course, always the case is Israel. For years, the war – and the Holocaust – were taboo topics. European Jews, many Israelis felt, had gone to the camps like sheep to the slaughter, without resisting, without putting up much of a fight. That perception began to change, almost overnight, as a result of one major event – the capture and trial of Adolf Eichmann.

Act I: The Needle

Every other Israeli, it seems, claims to have been somehow connected to that heroic operation. But for years, one man who actually was at the heart of the covert kidnapping, did all he could to erase himself from the history books. Gregory Warner and Daniel Estrin bring us the complicated story of Dr. Yonah Elian, the anesthesiologist who sedated one of the world’s most notorious Nazis.

This episode is a collaboration with “Rough Translation,” an NPR podcast that tells stories from around the world that offer new perspectives on familiar conversations. 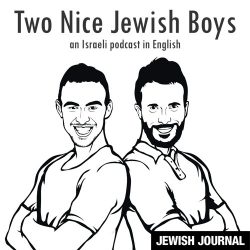 Two Nice Jewish Boys is an Israeli podcast in English hosted by Naor Meningher and Eytan Weinstein. Each week they feature incredible guests, and have fascinating conversations. You can subscribe to the ‘Two Nice Jewish Boys’ Podcast on Apple Podcasts, Spotify, or wherever you get your podcasts.