When Raymonda Tawil met Rut Dayan in 1970, they seemed well-primed to be enemies. Rut, then the wife of Israeli war hero and Minister of Defense Moshe Dayan, was visiting a hospital in the Palestinian city of Nablus to deliver dolls to children. Tawil, of Palestinian aristocracy, was there to witness this exercise in diplomacy. She was not impressed. Today, these elder stateswomen are dear friends. From Malta, where they most recently met up, they share the story of how they won each other over in “R&R,” Act I of this week’s episode. Anthony David told the story of these two grand ladies in his recent book, “An Improbable Friendship,”

Act II, “The Center for Rationality,” introduces us to economist Eytan Sheshinski and mathematician Yisrael Aumann, both of them at the top of their fields who, nevertheless, seem to leave clear thinking behind when it comes to their favorite pastime: hiking together.

In Act III, journalist Danna Harman brings us “Girls’ Night In” – the story of two women in their forties who have been acquaintances, but by no means friends, since childhood in Ramat HaSharon. It was a pair of tragedies that drew them close. 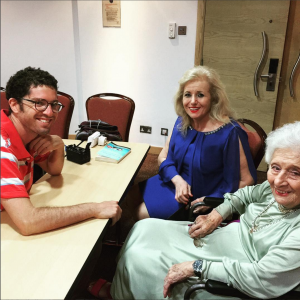 Act II: The Center for Rationality

Economist Eytan Sheshinski and mathematician Yisrael Aumann leave clear thinking behind when it comes to their favorite pastime: hiking together.

Two women, that were childhood acquaintances, but definitely not friends share their story about how a pair of tragedies drew them close.